After some internal debate I decided to go ahead an order a K40 laser off of Ebay. They are inexpensive 40W Laser engraver/cutter setups with software. There are a lot of mixed reviews for and against them, but paying $500 vs $2000+ for a starter laser seemed like a better way to dip my toes in the water. So a couple weeks ago a went ahead and bought one. This last Friday something appeared at our door. 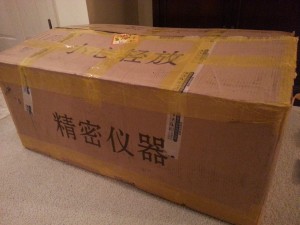 Score. Now I knew what I was going to be playing with over the weekend. So I started unboxing. Unfortunately I quickly ran into a problem. 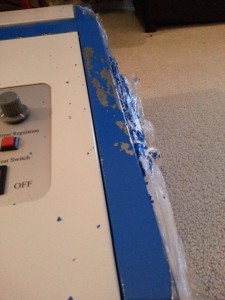 It looks like it was wrapped before the paint had dried. As I continued to unwrap it more and more paint came off. Even the water hoses that were attached had paint on them where they had been tucked inside the cavity. In addition the controller board was mounted so that the USB port was partially covered up. Obviously a rush job. There was a CD inside with nothing written on it. I guessed this was the software and happened to be right, there weren’t any manuals. I was highly suspicious about the fan,but it checked out okay. The included USB cable was labeled High Quality, so it must be high quality. 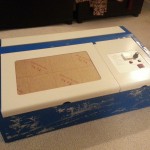 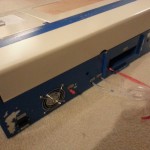 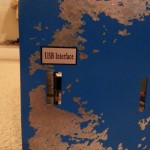 I sent off an email to the seller with some pictures and we’ll need to figure out how to handle this. Their first response asked me to hook it up and see if the internals were working.

So after setting up a small shop area in the garage and a trip to Lowes to get a couple things to zap I fired up the software and started trying to figure it out. I was amazed as the internals seem to work just fine and the laser had good focus. So I churned out a couple of test projects. 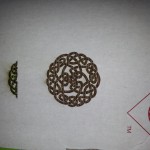 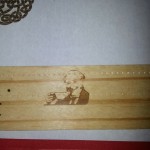 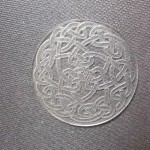 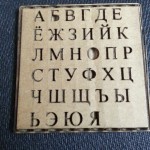 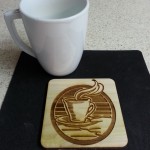 I’ve got a few fails, but I won’t post those. Mainly related to figuring out how to cut through board and not switching between Engrave and Cut mode correctly. There are also a couple that are due to the controller board just straight out flipping out and not cutting what I told it to do too.

Looking at things that need improvement. Definitely the bed needs to be replaced and an air assist head added. Something totally different needs to be done with the exhaust system. It seems to work pulling air out of the cutting area, but it’s not really directing anything down the pipe it attaches to. I am fairly excited about actually being able to do something even though it looks like the machine has been attacked with a weed whacker.

Look for a little more life in this site as I post updates on my progress and my setup.