It was about a year ago we moved into a new (to us) house and it has a lot of cool features. One of the items is a set of in-ceiling sound in the kitchen area and the living room. It’s a pair of Speakercraft MT6 One’s that run through a volume knob near an entrance to each room with the speaker wiring terminating at the bottom of one of kitchen cabinets. Unfortunately when we moved in there was nothing plugged into them to power them. So out of my pile of old electronics (which is overly large) I pulled the first receiver I owned, a SonySTR-D515. While the Laser Disc button wasn’t all that helpful the fact that it had A/B speaker output made it ideal for the job. I had an old Belkin bluetooth receiver I added to one of the aux inputs so we could stream music over it. In the end though this really ended up be more of a hassle to turn the receiver on ( because it always put out white noise ) and select the right input and dial in the volume to play music over the speakers. Whatever you were streaming bluetooth with (usually a phone) has to stay really close to the receiver. A singular sound volume never really worked out well either. In the end an Echo we had in the room became the day to day music playing solution and the nice speakers sat silent.

It was about a month ago I got an itch that I wanted to change the situation. I am in no way a real audiophile. So my goals were simple:

While I’d looked at the possibility of putting in Sonos or some other system like that, it was beyond what I wanted to spend. My big disappointment here in the Amazon Alexa products is that the Echo doesn’t do bluetooth, but I did have an Echo Dot which does, so I ended up just swapping their locations. This setup will most likely be backed by a Google Home once it arrives, but that’s an entirely different post. At one point I debated going with two Chromecast Audios, one for the kitchen and the other for the living room. While I could create a group and cast to both of them I couldn’t really think of a time where I would want to play two different streams into two rooms that close together. One might be on or off, but I didn’t think they would have two different things to them. This was probably good as in the end I have two input channels that I mix together and split out, with two Chromecasts I would have had to split the bluetooth and then mix into each amp separately and would have upped the cost.

Some peg board and zip ties and I end up with: 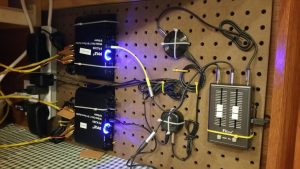 This now sits at the back of the cabinet freeing up space to stash more pots and pans in the space the receiver had taken up.

It allows me to tune the living room speakers volume, bass and treble different than the kitchen if I so wish and I can adjust the input of the chromecast vs bluetooth if one seems to play louder than the other. For wiring I did add some ends to my speaker wire and will need to custom make something to hold the plugs apart, right now it’s just little pieces of foam and that does the trick. Maybe one of those things that holds your toes apart when you paint the nails would do the trick, but I don’t happen to have any.

The sounds is good and I can tell the Dot to connect to the bluetooth speakers and cast that way without a problem and switch over to casting a playlist off of Plex from my laptop without needing to adjust anything. So right now I’m very happy. There is probably more tweaking to be done in the future and switching over to the Google Home could be an interesting adventure.